I wrote this status a little while ago….

…..well OK I got the month wrong, when I realised I soon changed it to the 2nd of November. That should give everyone a fair bit of notice to book themselves time off from the world, and enter the fun, excitement and passion of freestyle ice skating.

BUT after 2 days from that status, a 2nd of November Freestyle Gathering event was set up on Facebook by Olliee Wildsmith, the photographer of OH MEDIA and freestyler of TXIST (Tamworth Xtreme Ice Skating Team), and 15 people put themselves as attending….wow!

By this time I had finished editing and published The Green Party on Ice Video on YouTube, which received an exceptionally high number of views, probably due to the high number of people who attended the event, and the fact it was the first time an English team had crossed the channel to France to attend an international freestyle event, and also the first time an English team had filmed a freestyle ice skating event that has taken place abroad outside the UK. I suppose this video has properly shown the UK freestyling community how awesome large freestyling events can be to skaters who practise this style.

Where to hold these events in the UK is a tricky problem, quite a few ice rinks have strict rules about what you can do on their rinks, such as no cameras/filming, no jumps or tricks. Health and Safety is a little strict in the UK unfortunately.

I’m not against Heath and Safety, basically the rules are there to ensure people don’t get hurt as a result of not thinking before doing something, or by being stupid, and a lot of it is just good common sense. But it is a shame if over-enforcement of the rules prevents people from having fun.

Maybe ice rink management don’t want a situation where someone gets hurt and end up facing the consequences, such as the risk of being sued, losing novice skating customers because they are afraid of being hurt or scared by advanced skaters doing tricks and then losing income from new skaters or maybe gaining a bad reputation of allowing idiots to do whatever dangerous stuff they like without any thought to other novice skaters trying to enjoy themselves, I can totally understand that, I have been told off by a parent of a novice skater for scaring their child by the way I was skating, which made me feel very guilty….even though I didn’t touch the poor child!

All I would ask an ice rink to do is support these events by allowing jumps/tricks etc….and allow filming on the ice, as long as skaters know what they’re doing and competent enough, and if it’s held on a public session, the customers are warned about what the session will be like, and that novice skaters are particularly warned. I’m sure the ice rink could do with the extra income when maybe 200+ skaters turn up for a fun night of freestyling and finish the night wanting to come back for more on a future event, and also the publicity the ice rink gets if a good video results from a freestyle event.

At the moment the UK is years and years behind the rest of Europe when it comes to established freestyle teams, freestyle events and the ice rinks that support them, sadly.

For me I love freestyling. I loved ice skating when I was a kid when my parents took me an ice rink, but by the mid-90’s all permanent ice rinks in the area had closed (Westover Road, Bournemouth and IceTrax of Tower Park, Poole) and the nearest one was a 50 mile drive. I was a kid then I couldn’t drive, and then after that I had forgotten about ice skating…until the Bournemouth International Centre started opening a temporary rink every winter, and started skating again. I knew I was getting good and bought my own hockey skates, but I didn’t want to be an ice hockey player and I didn’t feel that figure skating was for me, until I discovered freestyle ice skating in summer 2011 from a rink marshal called Luke Evans. I can only describe freestyle ice skating as a form of breakdancing on ice, much as the same way that figure skating is like ballet dancing on ice.

From then on I was hooked…..

After 2 years of practicing freestyle and learning tricks, as well as making good freestyle skating videos, I was lucky enough to get the opportunity to film and edit the Green Party on Ice. The edit itself was unexpectedly good, which overwhelmed a lot of people. Then I had the opportunity to film the Tamworth Snowdome freestyle event, which turned out much bigger than I thought it would become.

Perhaps this could be the start of a new trend of freestyle events in the UK.

Freestyle ice skating is the best thing I ever started in my life and I have made so many friends from doing it, and two years ago I never would have dreamed of doing the things I’ve done now.

Three years ago, I was just another Bournemouth International Centre Ice Rink customer. I just only wish I’d started this at an earlier age.

Possibly the biggest Freestyle Ice Skating Meet-up England has ever come across within freestyle ice skating, which was a success! I skate at SnowDome every week and I have never seen so much action and passion take place on that rink before. 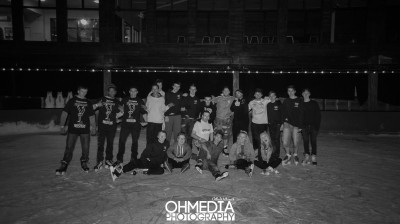 Due to high expenses within the UK for accommodation and transport, for these events/gatherings to take place here are quite negative as not everyone has the opportunity to attend these skating sessions. The UK is very strict on health and a safety regulation, which takes the fun out of what we really want to do and decreases the chances to progress further into making the freestyle trend become more mainstream. 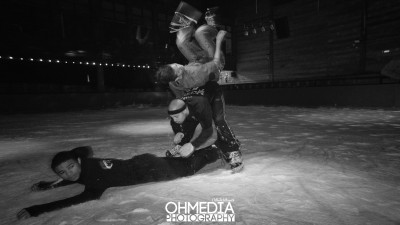 No way did I expect such a huge gathering; the original idea was that three guys from Bournemouth, Luke Evans, Andrew Gale and Kieran Thorne wanted to visit SnowDome for the first time so they committed themselves to a 5 hours car journey from the south coast. I created the event on Facebook to see who else would be willing to come along for a small gathering, the idea soon struck a light bulb to peoples heads as more than expected turned up on the night. What was a real surprise that a friend I had skated with twice before in the past, Mike IceKidd told me with a month in advanced that he would not be able to attend the event so I stuck by that, the night comes and he surprises us all by turning up all the way from London with his friend Ricky Ha. 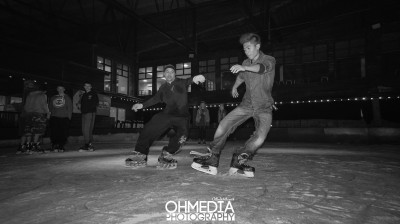 As we’ve successfully had the first UK Freestyle Ice Skating Meet-up, we now understand what passion and enjoyment the freestyle ice-skating trend brings us, throughout the whole night I saw nothing but smiles, laughter, energy, passion, commitment, nothing I have ever experienced before through my ice-skating years. 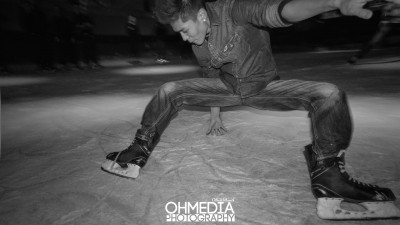 I did photos for the event and it was great to take them moments home, enhance them and share them with everyone, nothing captured the moments better and I smile and the photos every time I look at them. I was very pleased with the photos as I always struggle to capture the perfect photo due to the cold temperature and darkness but I pulled it off, I’ve had nothing but positive feedback on every single photo I captured, it’s even got myself a name within the freestyle community. 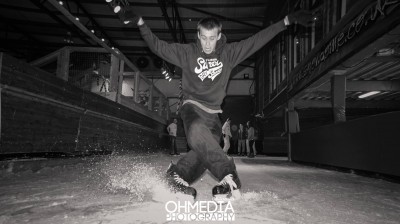 I experienced a lot of talent, a lot of opportunities to try new tricks I have never came across before, and it has widened my mind on how creative people can be when it comes to doing their freestyle routines. It makes me think outside of the box of what I am capable of at the moment, I feel I want to progress more, its self-explanatory that it has inspired me and its made me realise how much I love the hobby and how passionate it can be. 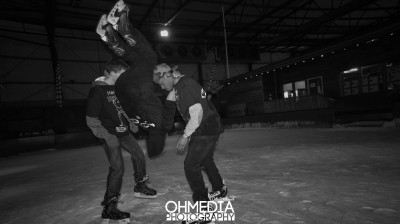 My future hopes are to organise more gatherings at different locations within the UK, I hope the freestyle trend can be pushed and hoping an official ice-skating event can be organized and dedicated to freestyle ice-skaters from around the UK and outside of the border. I have high hopes for attending the ‘Green Party on Ice 2’, which I am looking forward to very much and I hope to be the photographer for the night! 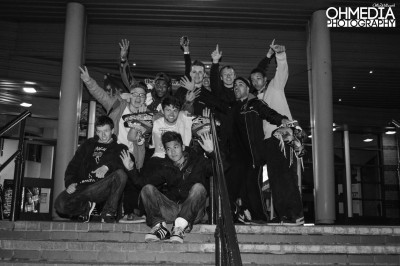 I’ve realized that ice-skating has been the best hobby I have ever came across and I hope to commit to it for many more years to come!